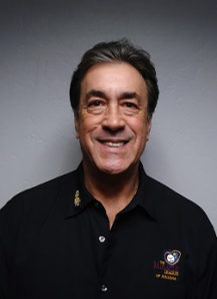 Gene moved to Phoenix in 1976 from Detroit Michigan to work for his brother in his businesses. The business was sold to Toshiba Corporation in 2006. While working in the office equipment business I met the man who put the seed money up to start the Miracle League of Arizona. Mike McGuire showed me a video of the Miracle League in Conyers, Georgia in 2004. Along with Tim Snyder we formed a non-profit called the Miracle League of Arizona. The three of us all had the same vision. To build a field in Scottsdale Arizona for special needs kids to play baseball at. The game changer happened when Dan Haren and I had coffee at a McDonalds after his son Dan Jr. was traded to the Arizona Diamondbacks. Dan agreed to become the President of the Miracle League of Arizona and the stars started to align. I have been blessed to work with so many great individuals and families who are now all part of the Miracle League of Arizona family. The greatest joy was signing our 1st Miracle League player Nicky Thau to his 1st baseball contract and seeing him, his brother Christopher, Mom Chrissy, Dad Carl watch their son play baseball for 10 years. I was blessed to know this young man from the time he was 5 years old until he passed 10 years later at the age of 15 years old. Nick’s joy has transformed us to where we are at today. To steal one of my brother’s famous authors quotes “It is amazing how much can be accomplished if no one cares who gets the credit” John Wooden.